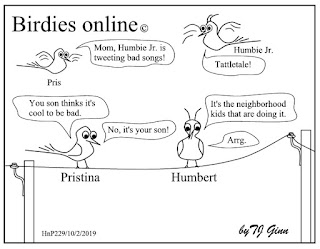 Emulating the adults is the first step of adolescence.

As a kid I started early. Rolling a pack of Lucky Strike Cigarettes
into the sleeve of my t-shirt like James Dean and cussing
made me feel cool. We greased our hair back and
dressed like every other lemming.

If you were a nerd back then it was death.

Watching our politicians in the high offices of our
democracy in Washington with their gutter mouth talk
in an attempt to denounce their opponent, shows
how immature and lacking in VIRTUE they really are.

I guess when I'm between a rock and a hard place
I may still show my tastelessness but
for the most part I strive to be better.

Politicians who show no more maturity than to
cuss their opponent publicly, lose all credibility
in the large scheme of things. And, with today's
video being retained at infinitum you will never escape the
worst image of yourself.

Hay political fools, it is not okay to
cuss in front of my kids.

Read my Novel 'Children of the Seven Hills'
and see how we got to this demoralized state.
Amazon.com