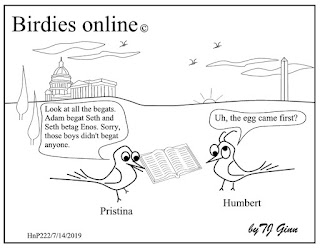 When I don't get any traffic I change the title.
The original title was...

'Begat or not to Begat, that is the question'

Ultimately, you must come to the realization that the zero event moment
did not happen since mathematically zero can be
approached but never achieved.

Obviously, Adam and Eve in the twenty-first century mind is impossible to
believe, but the interplay of the relationship between
God, men, women and the ignorant serpent
is what this is all about.

Science will never find the beginning of the universe because
the beginning resides in infinity. Basically the Big Bang
is still going on and we are in the middle of it.

When you realize that life is an infinite journey,
you could realize your fate and slow down,
there is no hurry, except that you make it so.
😉

Does God know what existential means?

Mathematics exists only in the human mind.
This is called metaphysical.
Mathematics truly exists though not tangibly.
Rene Descartes said the proof of existence is...
"I am thinking, therefore I am."

Ideology is metaphysical.
It only exists in human minds.

Postulate - Humans and all other animals would do nothing
unless they must.

God is the smartest existentialists.

He foreknew that Adam and Eve would do nothing laying
around the Garden of Eden day in and day out.
He also knew that idle minds are the devil's workshop.
I digress in cliché.

You know from experience that the child will disobey and
you are prepared a priori.
Your existential experience and your exquisite memory provides
you justification for the punishment you render to the child...
so, it learns right from wrong.

The supreme existentialist is playing this world
like a well-tuned fiddle.
All the players are taking the stage with their ideologies in tow.

And in the tempest the waters will part
and swallow up the soldiers of Pharaoh the unrighteous king.

Existentially you would do nothing unless you must.
You would not get out of bed except the fire
has gone out, and you must stoke it or freeze.

Watch as the ideological divide grows.
It is truly Biblical and existential.

Read 'Poetry and Prose - Aphorisms and Thoughts'
by TJ Ginn
Available on Amazon.com 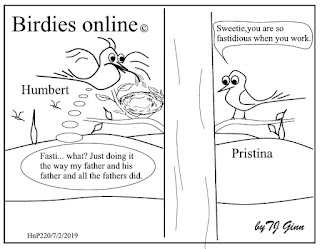 It seems so obvious that the Ten Commandments
were written by God Himself.

And it is also so obvious that these divine rules
are being forgotten and/or disbelieved.

Those who resolve to their own logic for governance make
things that are simple into something complex.

I am particularly aware that the present generation
does not honor their Mother and Father.

Confused by contemporary scientific thinking they
cannot believe outside of the box they have been put in.

Perhaps it is the fault of several generations that have fallen
away from the precepts.

Adultery is commonplace. Covetousness is ambitions reward.
Children quickly follow their peers and lose
the traditions of their Fathers and Mothers and the
convictions that made for righteous living.

I muse ... And they say animals are dumb.